My kitchen has made concessions to spoonieness** for years, long before I’d ever heard of spoonies or realised I was one. For example, I’ve used rice paddles instead of wooden spoons since the eighties, as they’re simply a more ergonomic shape and they do what they do much better than spoons. I have a small one I’ve had since 1984 and it’s now stained almost chocolate with use, and a newer, larger one, still a nice light brown, evidence, if it were needed, that I don’t cook nearly enough.

**If you don’t know what a spoonie is, you can find an explanation of the excellent Spoon Theory here.

Not, in those days, for spoonie reasons, but simply because they’re the best tool for the job. As a bonus, these days, they’re extremely light and very easy to hold. Much copied but never equalled. Tip: buy them from kitchenware suppliers, they’re dirt cheap, a couple of quid each. From suppliers catering for the disabled community, they’ll be 2, 3 or even 4 times the price, so beware. They come in two versions, aluminium or stainless steel. I’ve always used the almuminium one.

Knives, likewise, could be lighter. I do love a good, hefty – and razor-sharp – chefs’ knife, but there’s no getting away from the fact that they’re heavy, and much of the weight is in the handle, so a couple of years ago I switched to a Victorinox knife with a rosewood handle, which is much lighter, as is the Solingen steel blade, though it’ll still split a swede or a hard, white, cabbage with ease.

A few weeks ago, I bought an extremely cheap 20cm stainless steel casserole, which turned out to be far better that the price would suggest, having a mirror finish inside and out – nothing sticks – and a laminated base with aluminium sandwiched between the bottom and an outer layer of finely-machined 18/10 stainless steel. A brilliant piece of kit with a  3 litre capacity, amply big enough to cook a gammon joint or a piece of brisket, as well as my Fabada Wirraliana of a couple of weeks ago. Has a s-s lid and plastic handles too (I can’t abide glass lids – the world’s stupidest kitchen idea). 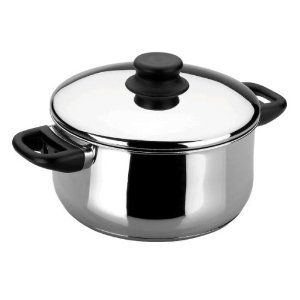 It quickly became clear that, with its light weight and double handles, it was far easier to use than a pan of equal size. It’s also big enough to enable me to pension off my slow cooker, as the very heavy crock is remarkably painful to wash.

So I’ve ordered another, smaller (18cm), to complement the bigger one, and consigned my two larger pans to the back of the cupboard.

Intriguingly, the larger one is £12.78 while the smaller is £16.09. No idea why Amazon decided to price the larger so low, but I’m not complaining. They only have a couple left, so the price might well go up when they restock.

I’ve also flirted, briefly, with pre-prepped veg, but I’m afraid supermarket standards aren’t up to mine (for diced, for example, read randomly hacked up!). There are machines that will prep veg perfectly – you don’t need people with the knife skills of next door’s dog making a mess of it.

Many years ago – and I know this won’t be to everyone’s taste – I replaced crockery with Lexan (polycarbonate), versions. Originally I used those from my backpacking  kit, some of which I still have, though I haven’t been backpacking for decades, because Lexan is more or less indestructible. Unless you put it on a hot stove!

A digression: I still have my Trangia cookset in case of power cuts; it runs on gas canisters or meths. Likewise a candle lantern, with a supply of candles, and a two-mantle gas lantern, plus a Petzl headtorch. I also have a winter sleeping bag too. The way things are going I’ll be needing them all sooner rather than later.

The reason for using Lexan is twofold. Firstly, it weight as close to nothing as you can get, and second, it lasts for years and withstands being banged on taps or dropped on the floor with perfect equanimity. Which, of course, china or earthenware doesn’t (I did try enamelled steel plates but, while light, they’re prone to chipping and, if (when!), dropped the noise is horrendous.

The Lexan kit is limited to dinner plates, bowls (2 sizes), and mugs, so instead of side plates, which I’d normally use for sandwiches are something similar, I use small, high-density polyethylene chopping boards as platters. Again, they weight little and are unbreakable.

I get my Lexan stuff here. I also buy my trousers here (other clothes, mostly T-shirts and fleeces, come from Lands’ End), as “backpacker chic” is very useful for a spoonie lifestyle, being comfy, warm (when needed), and, in the case of the trousers (Regatta Action trousers – used to be Craghopper Kiwis, but they tend to cater more for the skinnier end of the market now), which have loads of pockets for carrying meds, inhalers, wallets, whatever (the thigh pocket is very useful if using a wheelchair, power or manual). The double seat and knees also add to wheelie comfort, especially in cooler weather.

And that’s pretty much it. Apart from switching to ready meals (shoot me now!), I don’t know what I can do to make life easier. I’m not able to cook every day, or even every week, so when I am able to, I cook for the freezer, freezing single portions in foil trays from Lakeland, while sausages are wrapped in clingfilm in single portions, bagged and frozen.

Which reminds me, tonight I’m having a fry up, so I need to get black pudding (home-made), and pork sausages (ditto), out of the freezer before I forget, and take eggs out of the fridge later on (never cook eggs at fridge temperature).

2 thoughts on “Making life in the kitchen easier for spoonies…”