As the next step in my attempt to reclaim my old, pre hospital, life (or, at least, escape the one forced upon me by a malign fate), I’ve ordered a pair of ugly shoes. 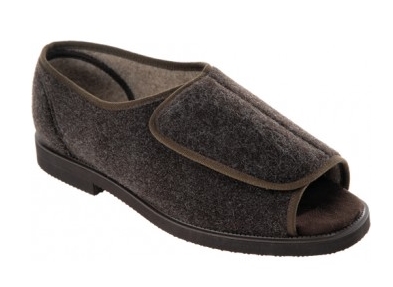 In fairness, they’re ugly because function dictates form, and they’re designed to open up fully, as shown, to accommodate swollen and bandaged feet – i.e., mine. There is a closed-toe version, but that’s even uglier and the closure is clearly an afterthought.

That’s in the case of this model – some styles they seem to have worked hard at uglifying for no good reason.

This is the fabric slipper version they also do suede or leather shoe versions, but I figured that fabric, being softer, would be less likely to further damage the fragile skin around my ankles/heels than the leather variants.

There’s still the problem with the fact that my feet and legs still leak considerably, a problem that can be ameliorated if we can stop my GP fucking up the prescriptions for my dressings. It won’t go away entirely, however, so what I propose doing is cutting part of the legs off a pair of waterproof trousers and making them into waterproof socks which can then be hidden away under a light bandage. They’ll also help contain the stink, as will a healthy dose of deodorant on the bandages (though, mercifully, this is diminishing).

They’ll be delivered on Monday and, if I can persuade the nurses to get here early(ish) on Tuesday, I can be out to the pub at lunch time. One of the problems with chronic illness, like ME, is that while the rest of the world socialises at night, by then I’m a basket case. So I have to take my pleasures when I can, which is during whatever window I have for activity, usually around midday and into the afternoon. However, the prospects for social intercourse, or the more fun kind, at that time of day are pretty minimal, as the other punters tend to be old farts,** the unemployed, young mothers with babies, a few more who are chronically sick and, for the most part, guys.

**Yes, I know that technically I’m an old fart too, but I don’t look it,** I don’t feel it, and if I start buying my clothes from Chums, wearing cardigans, Hush Puppies, or anything beige, you have my full permission to shoot me! Getting old is a lot more than simple chronology.

**If you’re wondering, now I’m recovering and regaining weight, I look more like my avi photo again, but slimmer. The animated corpse look is history.